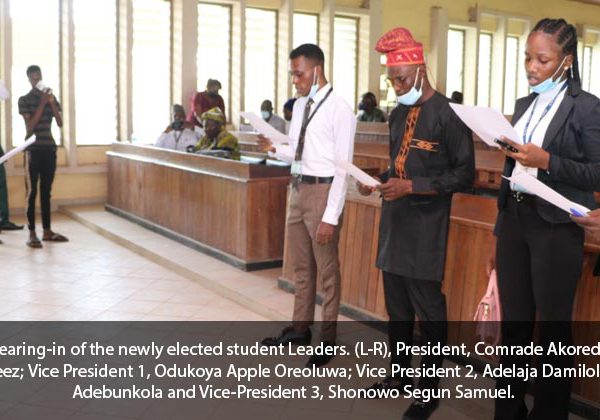 The newly elected Students’ Union leaders for the 2020/2021 academic session have lauded the University Management over the feat recorded in the deployment of ICT (Online voting process) in the conduct of the Students Union election. The Students leaders who described the Management under the  leadership of the Vice-Chancellor, Prof. Ganiyu Olatunji Olatunde, as unbiased umpire, spoke glowingly about the “strict monitoring of the election without subverting popular demand”. These remarks were given during the swearing-in ceremony for the new executive held on Friday, 17th September, 2021 at the Moot Court, Main Campus, Ago-Iwoye.

Speaking at the ceremony, the Vice- Chancellor, Professor Ganiyu Olatunji Olatunde, represented by the Deputy Vice-Chancellor (Academic), Professor Ayodeji Agboola congratulated the newly elected Students Union Leaders and charged them to work together as a team. He also advised them to avoid actions that could bring their names and that of the University into disrepute. While giving an insight into the benefits inherent in the use of technology, Prof Olatunde gave the students body a pat on the back for their cooperation in allowing the deployment of online voting in the conduct of the election that ushered-in the new leaders.

According to him, “We must commend you for embracing and supporting the new trend in the University. The Online teaching and learning process in the University is second to none in the country. The determination to completely go virtual, in all our processes and procedures is unwavering. The whole world has gone digital and technology is supposed to make life easier. The conduct of the students’ Union election must not be an exception. This we have been able to establish with the event of today”.  Professor Olatunde further reassured the Students body of the Management efforts in sustaining the uninterrupted academic calendar in the University while also making the process of Final Clearance easy for the graduating students.

“The Management is working assiduously to make sure you graduate on record time. When you graduate, you will not need to be going to every unit for clearance again, it will be done online to save you time and energy” the Vice-Chancellor noted.
Earlier in his address, the Ag. Dean, Directorate of Students Affairs, Dr. Moruf S. Oladimeji, who welcomed staff and student to the inauguration ceremony, deeply appreciated the Vice-Chancellor and his team for their unflinching supports to the Directorate while also instilling the spirit of innovation and resourcefulness in the Directorate.
“I want you to know how deeply appreciative I am for all the hard work and dedication the Management team under the leadership of our amiable Vice-Chancellor, Professor Ganiyu Olatunji  Olatunde, has put in place to have an efficient  and effective system.

“Today, I would like to present the newly elected Students Union Executive Members and Student House of Senate (SHS) to the School Management. This is to inform everyone present that the mode of election at OOU was usually physical, but it took a new dimension this year. The virtual (online) mode of election was adopted’’. Dr. Oladimeji added that “although we were confronted with lots of challenges, but we scaled them by Allah’s Grace. As we all know, new things or development does not come easily”.

Delivering his inaugural speech, the newly elected President, Akorede Afeez (a.k.a Senator Modesty) appreciated God Almighty for the journey so-far. He delightedly  lauded the Management for not only recording another feat in deployment of ICT for better performance in University’s processes and procedure, but also strictly monitoring the virtual election processes without any form of interference.

In his words “We give glory to God Almighty for making today a reality. We commend Management through the Office of the Directorate of Students Affairs for its open-mindedness with regard to the new system of voting adopted by the Electoral Committee.  We also thank   them for strict monitoring of the election without subverting popular demand. This august gathering marks the dawn of radical change in the system of Students Unionism, which started with the change in the mode of election from analogue to digital”, he noted.
He further commended  OOUITES for their sacrifices towards showing interest in the choice of the administration despite the  change in the system by the Electoral Committee.
According to him, “Your voice was so loud and strong that it could be heard by the deaf and seen by the blind. Leadership is to servant hood as they said, this is a call to speak the interest of  all and utilize the 2Cs (Consultation and Consolidation) of Aluta at its peak. If the need arises, confrontation will certainly be imbibed, as freedom comes only through struggles”, he submitted.

The highpoint of the event was the oath-taking by the Students Union Officials which was conducted by Barrister Bunmi Osifeso who represented the Acting Dean, Faculty of Law, Dr. Gbade Akinrinmade. While Comrade Akorede Afeez Ayinla took the Oath as the 2020/2021 Students Union President and leading other members of the Executive Council, Senator Raimi Adedamola Rilwan was sworn-in as the Senate President leading other members of the Students House of Senate (SHS).